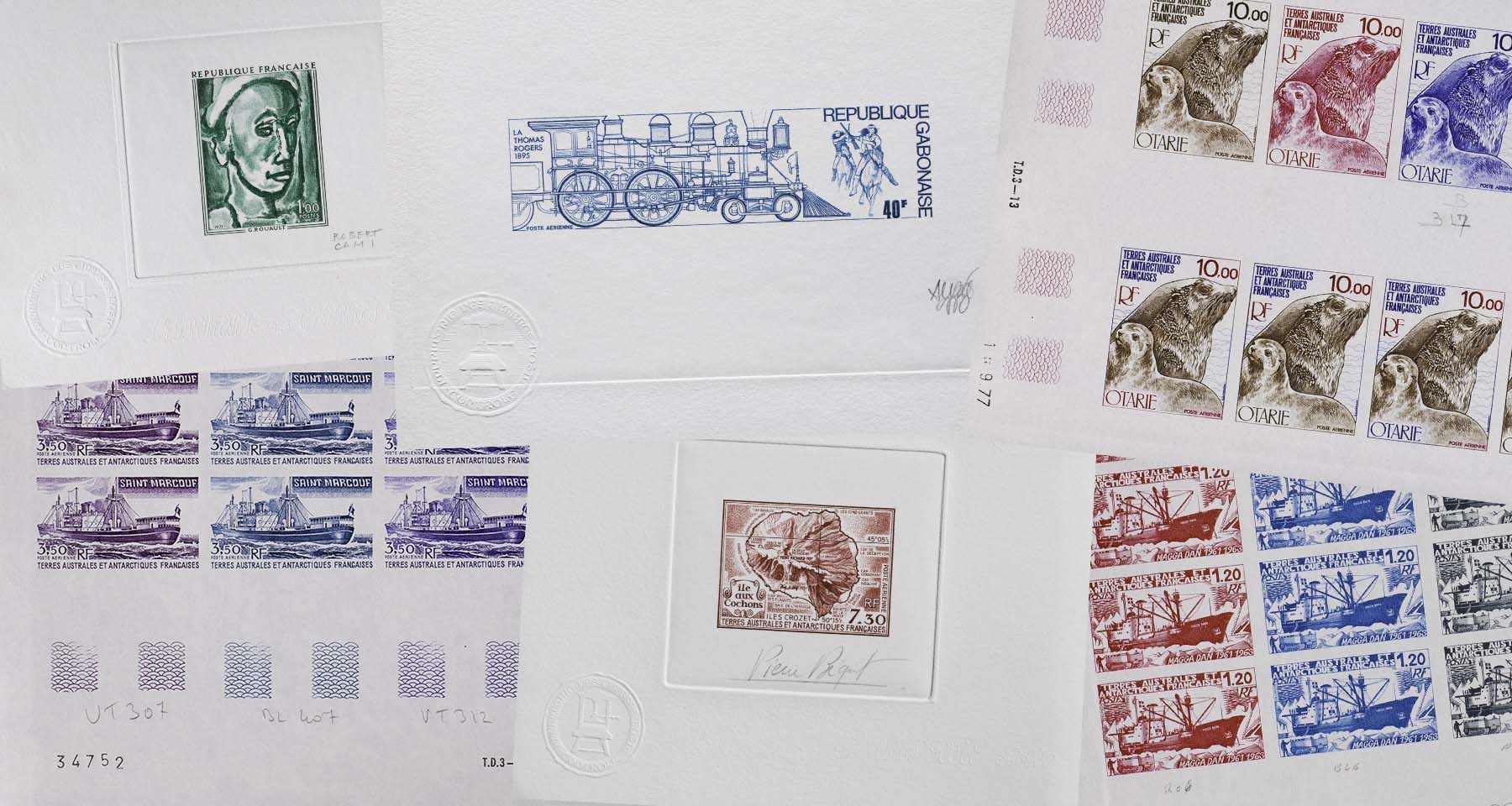 Stamp Proofs is an online gallery of more than 5,000 high-resolution images of artist's proofs and trial color proofs of stamps of the French Southern and Antarctic Territories (FSAT) and other countries and of various topics such as art, birds, Europa, ships, and trains. It also has a gallery of collective deluxe proofs and research on proofs. Its goal is to showcase the variety of colors and exceptional beauty of these proofs.

Proofs are special printings of stamps, usually made before a stamp is issued, to check the quality of the die or printing plate, check ink colors, provide a record for official archives, or to provide a special format of the stamp for a stamp's engraver, public officials, or collectors.

Die proofs are made directly from the stamp die - a block of steel on which the stamp design has been engraved and that will be used to produce the printing plates or cylinders that print sheets of the stamp. The stamp printed on the proof is surrounded by blank paper and there is sometimes a tell-tale indentation in the paper around the stamp (visible in the picture above) where pressure from the die has compressed the paper.

Plate proofs are usually full sheets of stamps printed from the same plates or cylinders used to print the issued stamps and are typically imperforate. They may be used to check the quality of the plate for minute flaws before a stamp is issued, make a reference copy for official records, test different ink color combinations, present to officials, or sell to collectors.

What are Artist's Proofs and Trial Color Proofs?

Artist's proofs are die proofs of engraved stamps that are printed on high-quality paper used for fine art engravings and signed by the engraver. Before 1960, they were printed unofficially by a stamp's engraver before he turned the completed die over to the government printers for production of the printing plates or cylinders. Since 1959, they have been officially produced by the French government stamp printers in limited quantities of between 8 and 28 and embossed with official seals as a security device to show that the proofs were officially produced. Artist's proofs are produced for stamps of France, Monaco, Andorra, the French Southern and Antarctic Territories (FSAT), Saint-Pierre & Miquelon, French Polynesia, New Caledonia, and Wallis & Futuna. They were also produced for stamps of French African territories, Laos and Cambodia until the mid-1970s or 1980s. They are part of the tradition of artist's proofs of engraved artwork and showcase stamps as philatelic art.

The trial color proofs featured on this site are plate proofs of engraved stamps of France and French-speaking territories printed in up to 48 different color combinations. They were printed from at least the 1950s to 1984, typically in quantities of 30 sheets (300-700 stamps depending on the number of stamps in each sheet) in different colors and were sometimes given to senior government officials or politicians.

If you have questions about proofs or have images or information to add to the website, feel free to contact me at the email address on the contact page.